Science conference presentations are listed under the 'Experience' tab in the 'Abstracts' section.

Honorary Research Associate at the University of Waikato
I am currently working on several projects looking at the recent eruptive history of Ngauruhoe volcano (a.k.a Mount Doom in Lord of the Rings) in New Zealand. This continues from my Masters research described below with collaboration across several institutions.
More coming soon!
Volcano Reports Writer and GVP Image Collection and Outreach Specialist
Smithsonian Institution Global Volcanism Program

GVP Image Collection Curator and Outreach Specialist: My role is to update the image collections and improve descriptions of all the world's Holocene (erupted in the past 10,000 years) volcanoes, and create materials to increase global awareness and understanding of volcanic hazards as part of the VolFilms project.

On top of my job, I am working to improve global volcano-based communications, especially during times of volcanic eruptions that get focused on by global media. We now live in a world of 24/7 online media and social media where the wrong information often travels much faster than the correct information and is much easier to find. I am working with the global volcanology community in order for us to come together to ensure that people have easy access to volcano information. 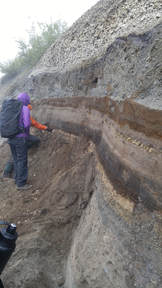 I am working on the International Focus Group on Tephrochronology (INTAV) "Throughput: Standards and Services for Community Curated Repositories" project that aims to link various databases containing tephra data together in one place so that all the diverse fields that use this data can access it. Tephra (explosive volcanic deposits such as ash and pyroclastic flows) are very useful for volcanology (hazards, impacts, and eruption history), Quaternary stratigraphy, palaeoclimatology, palaeoecology, physical geography, geomorphology, pedology/palaeopedology, archaeology, and geochronology, as they tephra deposits can travel great distances across multiple countries.

I am also investigating tephra deposits in Oregon and Washington that help us to better understand the volcanic history of the area. The tephra layers in the area come from volcanoes such as Mount St. Helenes, Medicine Lake volcano, Newberry volcano, Three Sisters Volcanoes, Glacier Peak, Crater Lake, Mono domes, etc. It is important to understand the future hazards in the region that can also impact vast areas beyond the volcanoes, as we saw during the 2010 Eyjafjallajökull eruption in Iceland. 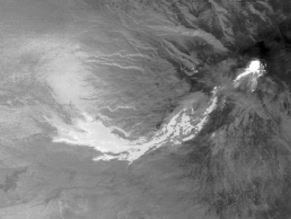 Pyroclastic density currents are volcanic granular flows that include dome collapse-derived block-and-ash flows, and column collapse-derived pyroclastic flows. Volcanic dome-building cycles can last for years and can produce numerous collapse events that deposit block-and-ash flows up to 19 km from the dome. These impact surrounding communities and too-often result in fatalities, and populations have to be evacuated. Shiveluch in Kamchatka, Russia, is one of the world’s most active dome-building volcanoes and has produced some of the largest historical block-and-ash flows, globally. The current eruption phase of Shiveluch volcano has been ongoing since 2001 in a cycle of dome growth and collapse. Understanding these prolonged dome growth episodes and characterizing the extreme end-members in deposit size and runout range is important for investigating these hazards at Shiveluch and other similar volcanoes.  This multi-spatial scale investigation links dome activity to the block-and-ash flow deposits using satellite- and field-based data. Advanced Spaceborne Thermal Emission and Reflection Radiometer (ASTER) thermal infrared (TIR), shortwave infrared (SWIR), and visible-near infrared (VNIR) data are used to quantify the distribution of dome collapse events and resulting deposits through time. Small-scale deposit features are identified with field and high spatial resolution (~0.5 m) WorldView-02 and QuickBird-02 panchromatic data. These block-and-ash flow deposits are compared to the well-studied Mount St. Helens 1980 column collapse pyroclastic flow deposits using historic aerial photography and airborne LiDAR data. Although these deposits are composed of different material that result from the different eruption styles, they contain similarities that reflect similar depositional processes, and differences that reflect the initiation mechanisms. These remotely-identified characteristics can help with rapid identification of the eruption style and can provide a safe and rapid assessment of eruptive products at dangerous and/or remote volcanoes around the world.​ 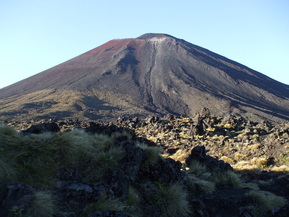 Ngauruhoe volcano is a young composite cone in the central North Island of New Zealand, with most recent strombolian and vulcanian style eruptions in 1954-55 and 1974-75.  Both eruptions produced hypocrystalline, medium grained, porphyritic, basaltic andesite to andesite (SiO2 54.88-58.85 wt.%) juvenile clasts containing quartzofeldspathic xenoliths, with a pl>opx>cpx>ol mineral assemblage within a glassy groundmass.

The 1954-55 strombolian deposit is a 28 m thick scoriaceous lapilli and bomb deposit with a vesicularity range of 6-82% and comprising a coherent to densely agglutinated, and laterally discontinuous, stratified facies that represent changes in intensity and fire fountain direction.  The overlying deposit is a 0.8 m thick, finely bedded, dense angular lapilli and ash facies resulting from vulcanian pyroclastic fall and surge activity.  The 10 m thick 1974-75 deposit comprises a massive, scoriaceous, dense angular lapilli, block and bomb facies overlying a zone of dense agglutination, during the climactic sub-plinian eruption.

Ngauruhoe has an open, steady-state magma system influenced by magma mixing and homogenisation, indicated by plagioclase sieve textures and oscillatory zoning, and crustal assimilation that incorporated up to 5% quartzose xenoliths through the recent eruptions.  Physical conduit processes were the major influence on eruption style change from strombolian to vulcanian.  The 1955 vulcanian deposits comprise 40% vesicular ash (vesicularity up to 82%) with abundant coalescence and up to 99% interconnectedness, and 60% poorly- to non-vesiculated ash suggesting the presence of a degassed cap rock that likely resulted in pressurisation.  No accretionary lapilli or quenching textures were observed to indicate magma-water interaction.